Makerere University Rotary Peace Centre on 16th – 20st October 2022, hosted the 2nd Capstone conference where fellows presented their findings and achievements in their social change initiatives in different communities. The function brought together fellows from the 2nd and 4th cohorts for purposes of interaction and mentorship.

The capstone conference is where  Peace fellows  present work they have been doing to promote peace in the communities. Cohort 2 enrolled at the beginning of 2021, attended classes and went  out in different communities in different countries to execute the projects. The Capstone covers the fellows work in the period of 9months - one year funded by Rotary International. 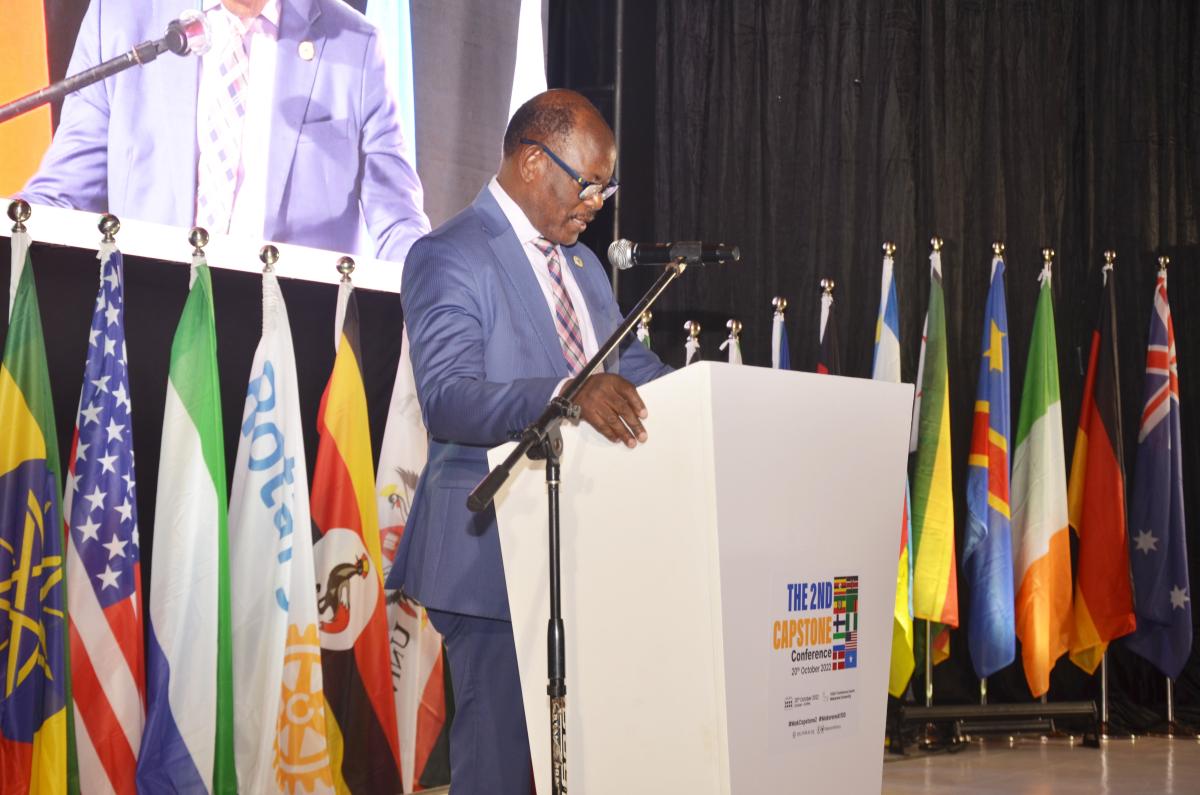 Prof. Nawangwe  emphasized to the fellows that they can do small things to build peace in the communities like helping refugees to grow their own food  to minimize conflicts with the host communities and  engaging and training the youth so that  they can engage in productive  ventures instead of  involving  in violence.

Nawangwe hailed the Rotary Peace Centre for promoting the university on grounds that  it demonstrates that beyond training and issuing certificates, the university exists to impact on society by creating and promoting peace. Prof. Nawangwe implored fellows never to underestimate what they do.

“Without peace you cannot have development even in your own home. As a country, if we are in conflicts, we cannot develop. Almost every war begins in the brain of one person.

As peace fellows, you play a big role in ensuring that peace lasts long. You can help people solve many small problems that could probably grow into wars. Don’t underestimate the work you do in the communities because it minimizes or prevents conflicts and  wars,” Nawangwe said. 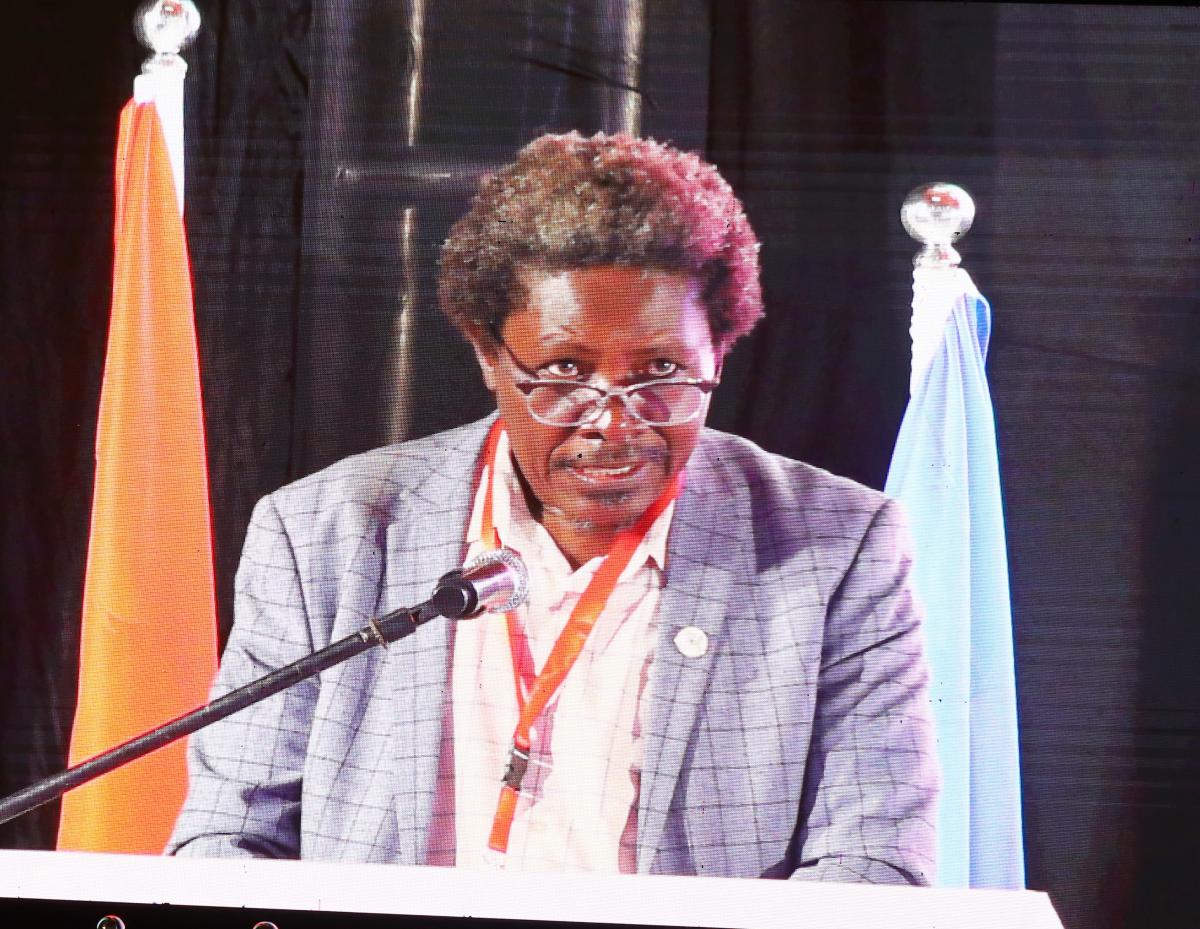 Representing the Principal CHUSS, Prof. Patrick Mangeni appreciated the support given by the university management and the amount of the productivity within the university and the significant activities taking place in  commemoration of the 100 years of existence.

“It is a year of harvest celebrating 100 years. We want to appreciate your leadership Mr. Vice Chancellor and the support you have given us. It is gratifying that the launch of cohort 2 as they are presenting today, that you are doing this when we are celebrating”. Prof. Mangeni steted.

Prof. Mangeni thanked all teachers and several actors who have given support to cohort 2 fellows welcoming cohort 4 on board.

The Director of Makerere University Rotary Peace Centre, Prof Helen Nambalirwa Nkabala said  in the communities, the fellows  work with different agencies and  groups to respond to different challenges in their local communities, carrying out their respective social change initiatives, thereby contributing to  the existing peacebuilding and development initiatives using new approaches. 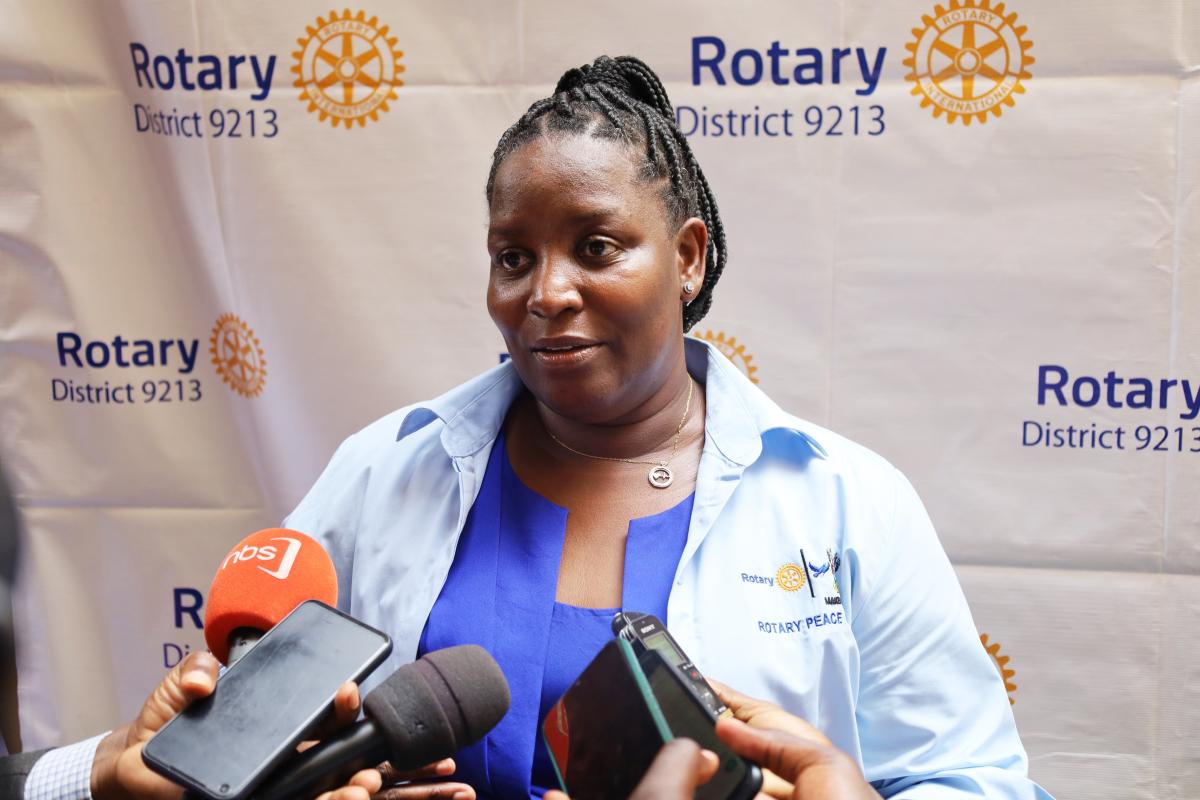 “Each initiative that is carried out is an impact of Makerere University as part of our community service. Internally, we are already carrying out the  training on peace building and conflict , transformative conflict analysis, alternatives to violence and the center advocated for setting up a centre for alternative conflict resolution mechanisms in order to ensure that we can resolve any issues amicably”,  Prof. Nkabala  said.

Nkabala said this was the second capstone conference of the peace centre. The first one took place in April 2022, whereby cohort 1 peace fellows presented their community projects on peacebuilding. During the first capstone conference, cohort 1 peace fellows reported on their implementation of 15 community initiatives in 10 African countries under the theme,‘Peacebuilding re-imagined: Social change initiatives as a vehicle for peacebuilding and development’. 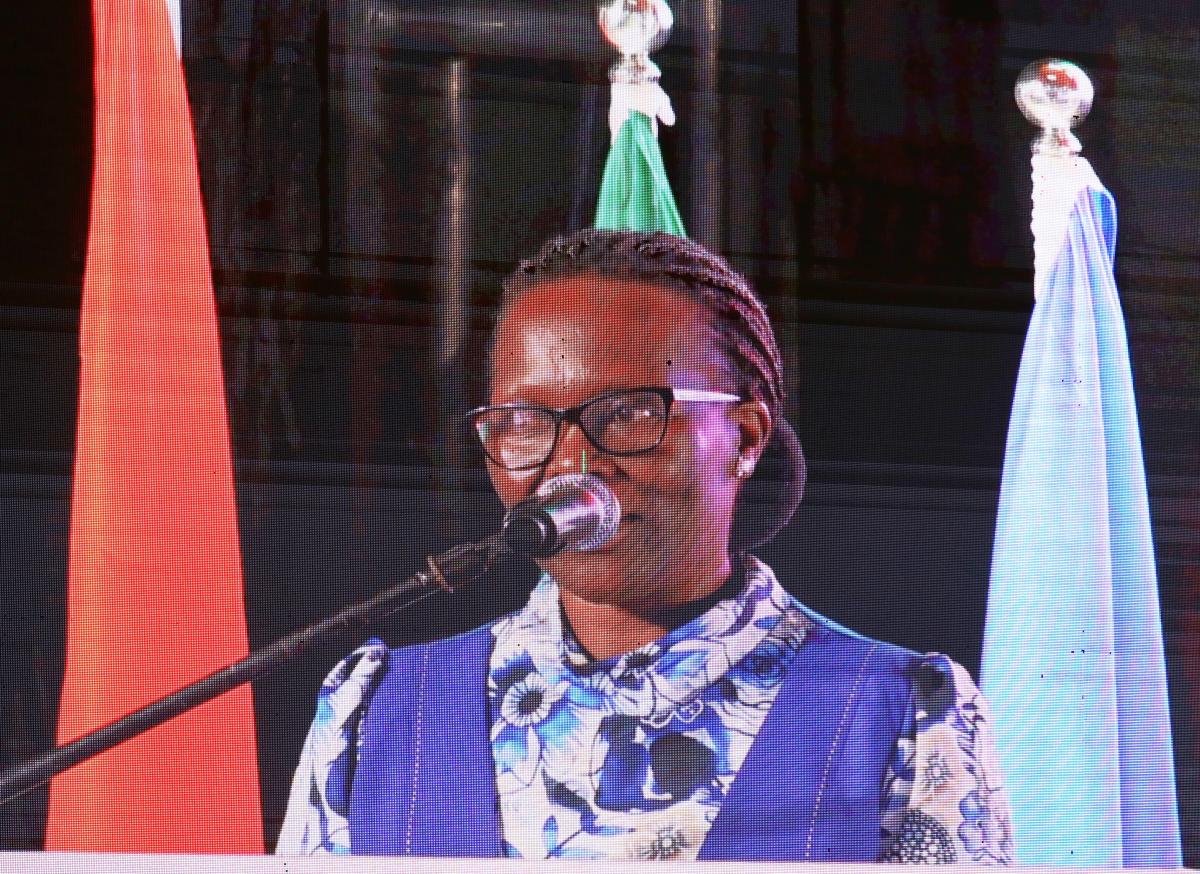 Dr Sylvia Tamusuza, a member of the peace centre’s board, said the centre has 31 alumni belonging to the first cohort.

“ In total, the centre has enrolled and 72 fellows. I urge  you both of fellows in cohort and 4 categories to be ambassadors for both Rotary International and Makerere University by making beneficial impact wherever you go”, she said.

The  District Governor of Rotary District 9213, Mike Sebalu explained that  Rotary International has seven areas of focus, and the first being  peace and conflict prevention and resolution.

“ The other  areas  include disease prevention and treatment; water and sanitation; maternal and child health; basic education and literacy; economic and community development; and environment – also, directly and indirectly, contributing  towards achievement and sustenance of peace”, He said.

The District  Governor Nominee for District 9213, Anne Nkutu,  said the purpose of the centre is to build a critical mass of peacebuilders, using the positive peace framework which has eight pillars. 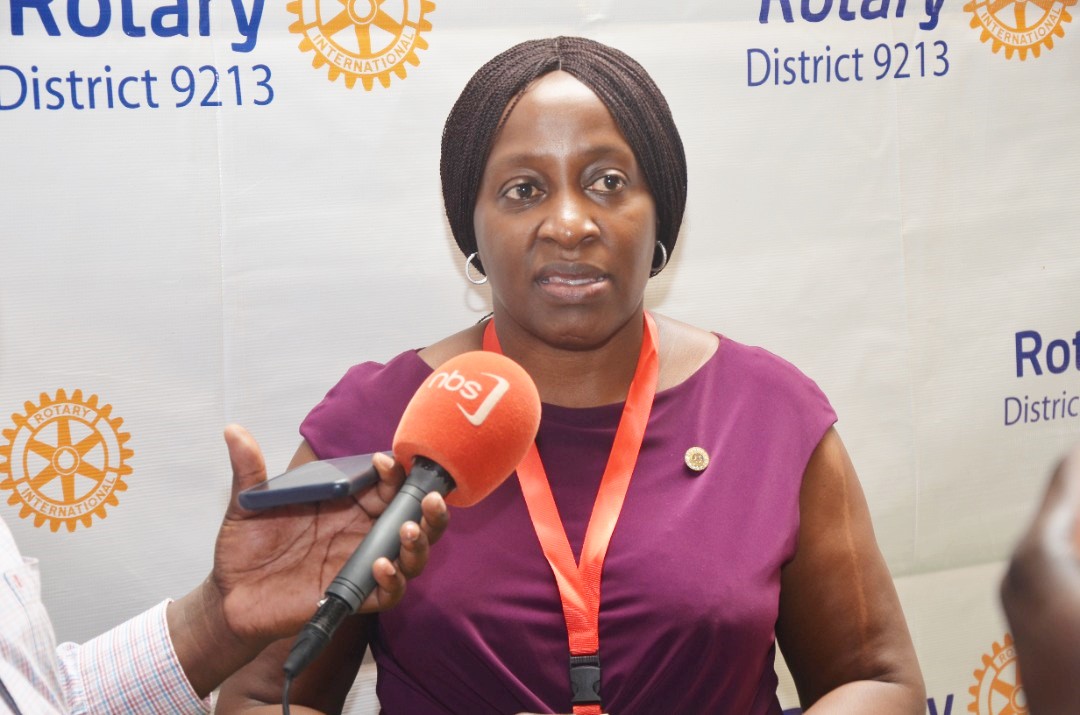 “One of which is access to resources and/ or services because  when people access resources or services and get engaged in production, they improve their livelihood and have less time and propensity to engage in conflicts and fights. Otherwise, deprivation of access causes scarcities which lead to conflicts and displacements”, she explained.

The other pillars according to Nkutu listed include:  free flow of information; high levels of human capital; good governance; sound business environment; acceptance of the rights of others; good relations with neighbours; and low levels of corruption.

The fellows in cohort 2 presented reports on their fieldwork in the local communities.  As part of the programme, cohort 4 members on day 1, pitched their social change initiative ideas. Subsequent to the pitching, they will further develop their concept ideas and later set off for their fieldwork. Day 2 was entirely devoted to a leadership seminar on the topic of ‘The paradox of survivor leadership and the dilemmas of leadership in difficult settings’.

Day 4 was devoted to the second cohort of fellows presenting reports on implementation and impacts of the social change initiatives (SCIs) they have been carrying out in the communities.  The community projects were carried out between January and August 2022, with varying lengths.

Noah Sempijja’s topic was ‘Refugees and natural resources’; the project was done in Nakivale refugee settlement, Isingiro district. Gorett Komurembe, a Ugandan, presented on ‘Increasing the meaningful participation of youth in decision-making for positive peace in Uganda’. The activity was done in Ntungamo district.

Sharmarke Yusuf addressed ‘Empowering young people as a positive force for transformational change and peacebuilding in Somalia’. Maximilla Wandera, from Kenya, presented her experiences on ‘Promoting peace through livelihood development’. The activity was done with slum communities in eastern Nairobi, Kenya. 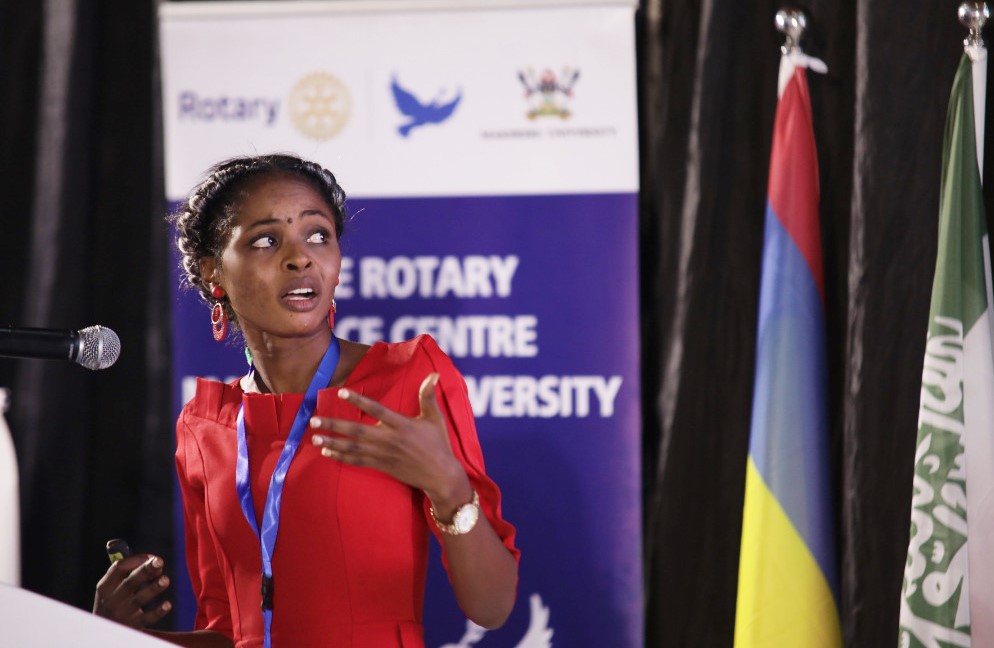 Seth Kinzie, reported on ‘African peacemaking database template: A model for sharing local peace’. He did his research in Malawi, Ethiopia and Somalia. Jennifer Montgomery, from USA, reported on ‘Restoring hope, rebuilding lives: Examining the role of resilience in community peacemaking’. She did her project among sex-worker women in Kisenyi, Kampala.

Teshome Mengesha, an Ethiopian, addressed ‘Peace education: re-educating peace’. The project was done with one urban and two rural communities in southwestern Ethiopia. Bayvel Moono, from Zambia, had topic, ‘Parenting and peacebuilding’ He did his social change initiative project in Kitwe city, Zambia.

Edmond Kposowa, from Sierra Leone, worked on ‘Food and peace under Covid-19: Improving food security and resilience of vulnerable communities in Northern Sierra Leone’. Dianah Akallo, Ugandan, reported on ‘Scaling up gender-based violence prevention through male engagement’ which she carried out in Oyam district, Uganda.

Osward Tumusiime, from Uganda, presented ‘Financial management and resilience for oil and gas project-affected households. The activity was carried out in Bunyoro sub-region, Uganda

The peace centre at Makerere University is the only one on the African continent out of the seven Rotary Peace Centers worldwide’.  It was established in 2020 and its first fellows were admitted in 2021. It offers a postgraduate diploma in Peacebuilding, Conflict Transformation and Development which is hosted by the Makerere University Peace and Conflict Studies Program (PCS).

The peace centre also awards 40 fellowships annually for the Professional Development Certificate programme of the Makerere Rotary Peace Center, Kampala, Uganda. The 40 are admitted in two cohorts of 20 each.